skip to main | skip to sidebar

While I was taking Easter pictures of adorable kids on Easter, this happened... 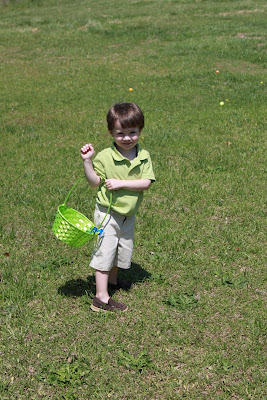 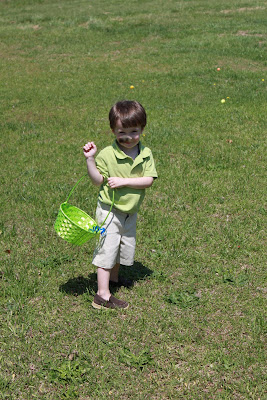 A closer look to figure out what the heck that was: 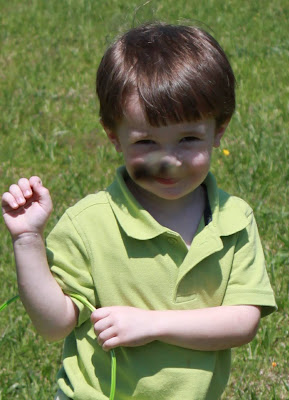 If there was a contest for Mom who captures the best photo of a bumblebee flying RIGHT SMACK IN FRONT of her kid's face, I would WIN!!!!
Posted by The Nicholsons at 2:49 PM 4 comments:

It's been a while since I've posted anything, but I couldn't resist posting these pictures. Perfect for a Monday morning, no?

We are having some puppy issues. Truthfully, we are having ALL of the puppy issues. Chewing being one of them. We're working on it, and quite frankly, it is teaching the kids how to take better care of their toys (and thus, the house).
Sometimes (a lot of times) there have been toy casualties. Yesterday GI Joe took a bad hit, and Jack started screaming "He's dead! The man who kills animals is dead! Cassie killed him and he was miiiiiiiine!" This is what we found: 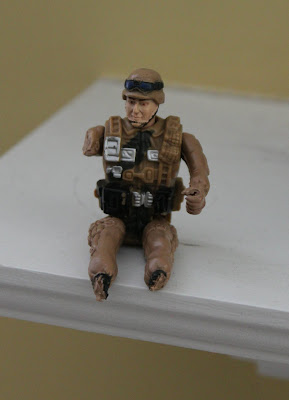 Poor GI Joe was missing his right arm and both feet. More tragic because it was a gift to Jack from Amanda. She picked him out of the treasure box at school just for him, and told Jack he was a hunter (the man who kills animals).

But a few minutes later, the kids went outside and I found the man who kills animals exactly like this: 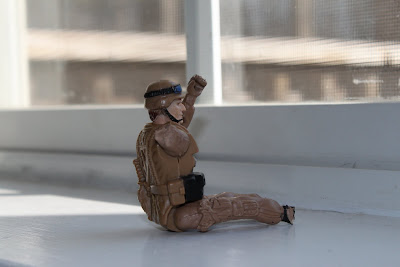 Jack had put him in the window, facing the backyard so he could watch the kids play. I don't know if the fist in the air was intentional, but it was a pretty good Toy Story moment.
Posted by The Nicholsons at 6:23 AM No comments: 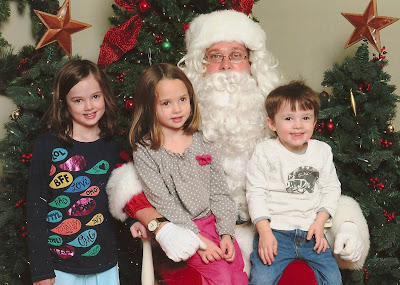 When the kids visited Santa this year, their requests were: 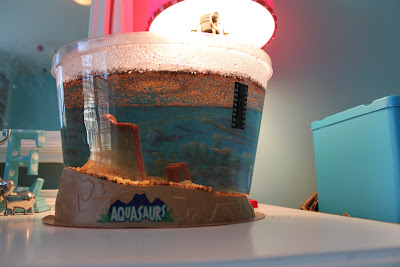 Behold, the amazing (and kind of creepy) dinosaur fish. They haven't hatched in this picture, all of the brown specks floating on the top are hundreds of fish eggs. Out of the hundreds of eggs, only 2-3 will actually survive to become grown ups. And those 2-3 lucky fish get to spend their 20-90 day life span right here in this tank! Super cool, right? 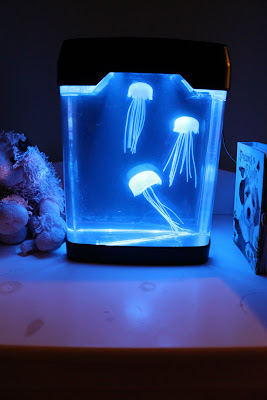 Now, this next gift proves that Santa is very good at his job. He realized that Amanda's request of "fish tank" wasn't so much an actual request. The sweet little girl was frozen with Santaphobia and muttered out the first thing that popped into her head. Since Elizabeth went first, Amanda quickly followed with "fish tank" and that was that. Santa can't NOT listen to the one and only one request. So he brought her something special, just for her - a jellyfish tank! 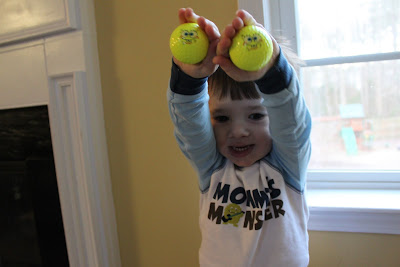 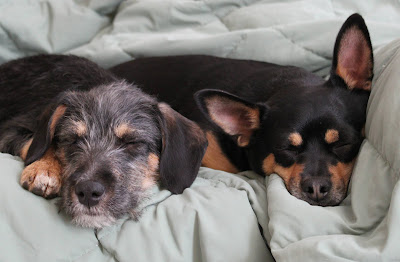 And what did Sully ask for? I don't know for sure, but I'd say he is pretty pleased. Introducing Cassie, our favorite Christmas gift of all. She is 100% flopsy puppy and she came with a bonus - our mole problem is officially solved!
Posted by The Nicholsons at 10:39 AM No comments: 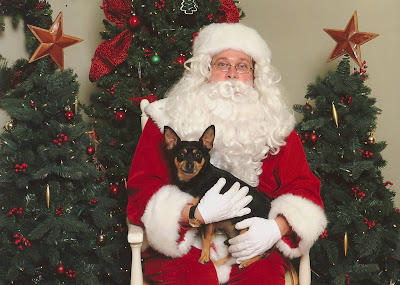 Sully kind of froze, he didn't know what to ask for, but he won Santa's heart and now we have this adorable picture that will cheer me up whenever I need a good laugh.

Posted by The Nicholsons at 10:30 AM No comments:

I'll Eat You Up, I Love You So 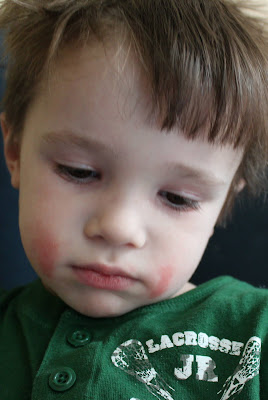 This morning he was banished from the girls' room because he used a straw to flick orange juice onto Elizabeth. Before Elizabeth screamed, Jack was up from his chair and frantically trying to gather his "things" in a tupperware bowl. At first I thought he was trying to prepare for time out, but he was already one step ahead of me. He was trying to beat exile.

By the time I even said "time out" he had reached the bottom of stairs. Elizabeth yelled "I'm outta here!" and Amanda replied "me too!" and they both ran for the stairs. As the girls passed him on the stairs, Jack yelled "I'm coming wiiiiiiiiith youuuuuuuuuu!" but he had already started to cry. He sat on the stairs and waited for me (and time out) with the tupperware bowl on his lap.

He tried again after time out. Knocking, then banging, then begging, then tattling. "Mommy! The sisters won't let me in!"After another time out warning, he was quiet. And then..."MOMMY!" So I replied from downstairs, "It's not Mommy, it's a Monster."

Quiet. Then the pitter patter of feet, but I couldn't tell if it was to or from the stairs. Then...

"Monster, the sisters won't let me in."

UGH. But he was curious, so he came down and played with the Monster for a bit. Then he went back upstairs and knocked on the girls' door. And the door opened.

Then I heard him gasp, the door close, and then...quiet.

Posted by The Nicholsons at 8:25 AM No comments: 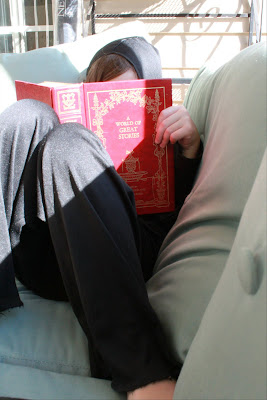 Posted by The Nicholsons at 8:03 AM No comments:

5 Things To Do In An Empty Amphitheatre 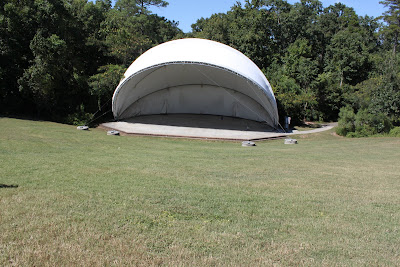 1. Roll, run or tumble your way to the stage. 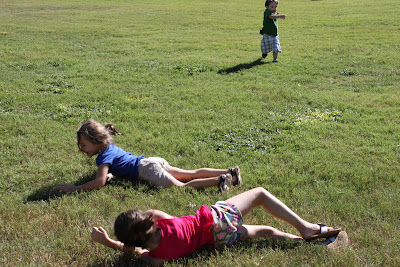 2. If your pants fall down and your bum is hanging out from running down the hill (Jack), pull your pants up! Blue comedy is too easy, you've gotta work for the laugh kid!
3. Dance, stomp, run, scream, sing, laugh - AMPLIFY! 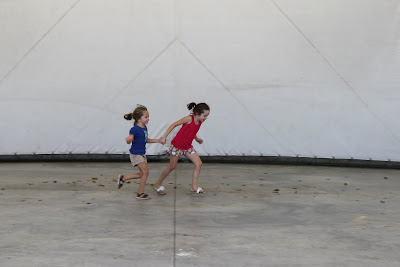 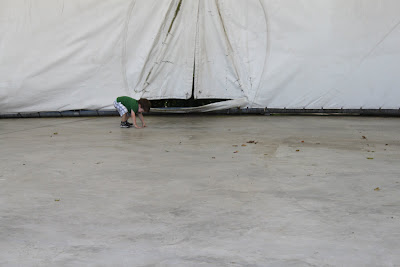 5. Hike your way back up the hill while basking in the applause (of your parents). 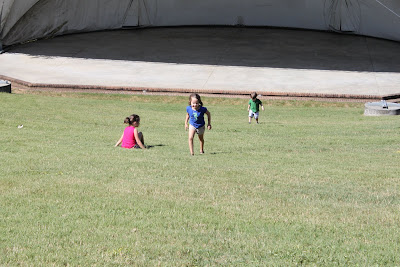 Posted by The Nicholsons at 4:57 AM No comments:

Quote of the Week

I find television very educating. Every time somebody turns on the set, I go into the other room and read a book. ~Groucho Marx 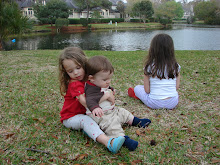 Amanda and Jack, cuddling as usual. Elizabeth, dramatically practicing her right to dissent.

The Nicholsons
South Carolina, United States
We are Nicholson, party of five. This blog is an attempt to stay connected with our family and friends living both far and near.

Previous Quotes of the Week

I hope if dogs ever take over the world, and they choose a king, they don't just go by size, because I bet there are some Chihuahuas with some good ideas. ~Jack Handey


Ah, summer, what power you have to make us suffer and like it. ~Russel Baker


Good communication is just as stimulating as black coffee, and just as hard to sleep after. ~Anne Morrow Lindbergh


No spring nor summer beauty hath such grace
as I have seen in one autumnal face. ~John Donne


The reason grandchildren and grandparents get along so well is that they have a common enemy. ~Sam Levenson


The dog was created specially for children. He is a god of frolic. ~Henry Ward Beecher


It’s a funny thing, the more I practice the luckier I get. ~Arnold Palmer


Cleaning your house while your kids are still growing up is like shoveling the walk before it stops snowing. ~Phyllis Diller


We cannot wait for the storm to blow over; we must learn to work in the rain. ~Jennifer Granholm


Youth is a wonderful thing. What a crime to waste it on children. ~George Bernard Shaw


Always end the name of your child with a vowel, so that when you yell the name will carry. ~Bill Cosby


Before you embark on a journey of revenge, dig two graves. ~Confucius


Develop your eccentricities while you are young. That way, when you get old, people won't think you're going gaga. ~David Ogilvy


My evil genius Procrastination has whispered me to tarry 'til a more convenient season. ~Mary Todd Lincoln


There came a time when the risk to remain tight in the bud was more painful than the risk it took to blossom. ~Anais Nin


The secret to creativity is knowing how to hide your sources. ~Albert Einstein


I have great faith in fools. My friends call it self-confidence. ~Edgar Allan Poe


Thunder is good, thunder is impressive; but it is the lightning that does the work. ~Mark Twain


If you cannot be a poet, be the poem. ~David Carradine


My theory on housework is, if the item doesn't multiply, smell, catch fire, or block the refrigerator door, let it be. No one else cares. Why should you? ~Erma Bombeck


I guess I just prefer to see the dark side of things. The glass is always half empty. And cracked. And I just cut my lip on it. And chipped a tooth.~Janeane Garofalo


If I only had a little humility I would be perfect. ~Ted Turner


Every year I live I am more convinced that the waste of life lies in the love we have not given, the powers we have not used, the selfish prudence that will risk nothing, and which shirking pain, misses happiness as well. No one ever yet was the poorer in the long run for having once in a lifetime 'let out all the length of all the reins'. ~Mary Cholmondeley


With kids, the days are long, but the years are short.
~John Leguizamo


The day after tomorrow is the third day of the rest of your life. ~George Carlin